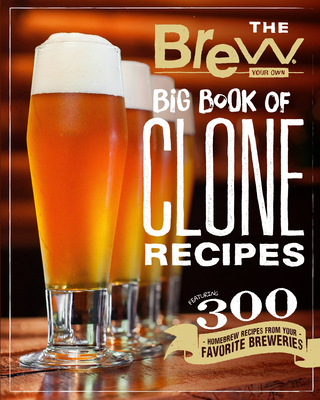 For more than two decades, homebrewers around the world have turned to Brew Your Own magazine for the best information on making incredible beer at home. Now, for the first time, 300 of BYO’s best clone recipes for recreating favorite commercial beers are coming together in one book.

Inside you'll find dozens of IPAs, stouts, and lagers, easily searchable by style. The collection includes both classics and newer recipes from top award-winning American craft breweries including Brooklyn Brewery, Deschutes, Firestone Walker, Hill Farmstead, Jolly Pumpkin, Modern Times, Maine Beer Company, Stone Brewing Co., Surly, Three Floyds, Tröegs, and many more.  Classic clone recipes from across Europe are also included. Whether you're looking to brew an exact replica of one of your favorites or get some inspiration from the greats, this book is your new brewday planner.

Brew Your Own, launched in 1995, is the largest circulation magazine for people interested in making their own great beer at home. Every issue includes recipes, how-to projects, and expert advice to help you brew world-class beer. Regular columns include troubleshooting common problems with Mr. Wizard, brewing a classic beer style in Style Profile, homebrew recipes for your favorite commercial beers in The Replicator, refining your brewing with Techniques, building brewing gadgets in Projects, and hearing tips, stories, and recipes from fellow homebrewers in Homebrew Nation. Brew Your Own publishes eight issues annually from offices in Manchester Center, VT. The magazine's online home, byo.com, offers a selection of the magazine's stories, projects, and recipes, as well as web-only features.

This book is a fantastic reference for both all-grain and extract homebrewers; each recipe includes both versions.
- The Brewholder

The Brew Your Own Big Book of Clone Recipes: Featuring 300 Homebrew Recipes from Your Favorite Breweries (Paperback)