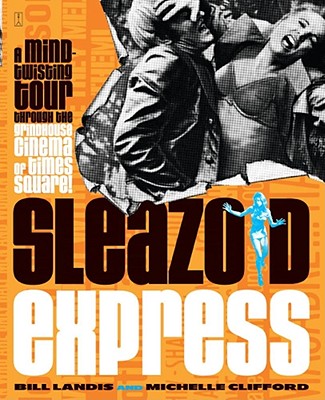 Warning: Watch your wallets and stay out of the bathroom!
In a bygone era, when Times Square was crammed with porn shops, gun stores, and drug pushers, disenfranchised moviegoers flocked to the grindhouses along 42nd Street. If the gore epics, women-in-prison films, and shockumentaries showcased within their mildewed walls didn't live up to their outrageous billing, the audience shouted, threw food, and even vandalized the theaters. For dedicated lovers of extreme cinema, buying a movie ticket on the Deuce meant putting your life on the line.
Authors Bill Landis and Michelle Clifford came to know those grindhouses better than anyone else, and although the theaters were gone by the mid-1980s, the films remained. In Sleazoid Express, Landis and Clifford reproduce what no home video can -- the experience of watching an exploitation film in its original fight-for-your-life Deuce setting. Both a travelogue of the infamous grindhouses of yore and a comprehensive overview of the sleaze canon, Sleazoid Express offers detailed reviews of landmark exploitation classics and paints intimate portraits of directors whose notorious creations played the back end of triple bills for years on end. With wit, intelligence, and an unflinching eye, Landis and Clifford offer the definitive document of cinema's most intense and shocking moments as they came to life at a legendary place.

Bill Landis founded the legendary magazine Sleazoid Express in 1980 while working as a projectionist on the old 42nd Street. He is also the author of Anger: The Unauthorized Biography of Kenneth Anger.

Hubert Selby, Jr. author of Last Exit to Brooklyn and Requiem for a Dream I am amazed at the information....[Landis and Clifford] certainly do know these films, and have captured the atmosphere and ambiance of the theaters....I'm certain a lot of people will have a lot of fun reading this book.

Larry McMurtry author of The Last Picture Show and Lonesome Dove One of my most cherished possessions is my near-complete file of Sleazoid Express, a work of rare wit and almost unbelievable devotion to trash cinema. I consider it an invaluable resource.

Robert Downey, Sr. A bent, funny, smell-the-facts look at the movies on 42nd Street during their heyday.

Sleazoid Express: A Mind-Twisting Tour Through the Grindhouse Cinema of Times Square (Paperback)