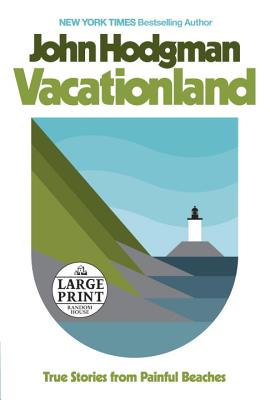 “I love everything about this hilarious book except the font size.” —Jon Stewart

Although his career as a bestselling author and on The Daily Show With Jon Stewart was founded on fake news and invented facts, in 2016 that routine didn’t seem as funny to John Hodgman anymore. Everyone is doing it now.

Disarmed of falsehood, he was left only with the awful truth: John Hodgman is an older white male monster with bad facial hair, wandering like a privileged Sasquatch through three wildernesses: the hills of Western Massachusetts where he spent much of his youth; the painful beaches of Maine that want to kill him (and some day will); and the metaphoric haunted forest of middle age that connects them.

Vacationland collects these real life wanderings, and through them you learn of the horror of freshwater clams, the evolutionary purpose of the mustache, and which animals to keep as pets and which to kill with traps and poison. There is also some advice on how to react when the people of coastal Maine try to sacrifice you to their strange god.

Though wildly, Hodgmaniacally funny as usual, it is also a poignant and sincere account of one human facing his forties, those years when men in particular must stop pretending to be the children of bright potential they were and settle into the failing bodies of the wiser, weird dads that they are.

John Hodgman is a writer, comedian, and actor. He is the author of three New York Times bestselling books—The Areas of My Expertise, More Information Than You Require, and That Is All. After an appearance to promote his books on The Daily Show, he was invited to return as a contributor, serving as the show’s “Resident Expert” and “Deranged Millionaire.” This led to an unexpected and, frankly, implausible career in front of the camera. He has performed comedy for the president of the United States, at a TED conference, and in a crypt in Green-Wood Cemetery in Brooklyn, New York. He is the host of the popular Judge John Hodgman podcast, in which he settles serious disputes between real people, such as “Is a hot dog a sandwich?” He also contributes a weekly column under the same name for The New York Times Magazine.