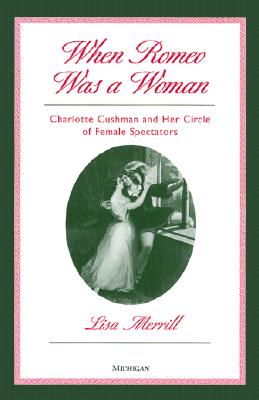 At the height of her career, actress Charlotte Cushman (1816-76) was one of the most famous women in the English-speaking world. Cushman challenged Victorian notions of gender in her stage portrayals of male characters and of strong, androgynous female characters. Offstage, she was a powerful businesswoman who supported her family, women lovers, and friends.
Lisa Merrill examines Cushman's personal correspondence to shed new light on the actress's relationships and in turn on our understandings of the nature of women's "romantic friendships." She demonstrates how Cushman's androgynous presence served as a symbol to many of her contemporaries, and revealed their multiple and often contradictory attitudes toward female performers, women, and the unspeakable possibilities of same-sex desire.
The biography draws upon unpublished archival material as well as on current critical work to view Cushman's career, relationships, and posthumous reception. When Romeo Was a Woman examines as autobiographical performance Cushman's own narratives, the stories she authorized others to write, and the letters she wrote to intimates. The book is richly illustrated with many previously unpublished portraits of Cushman in her various stage roles, including Romeo and Lady Macbeth, and other revealing photographs of her family, lovers and friends.
When Romeo Was a Woman will find an appreciative audience among general readers as well as specialists in gay/lesbian history, women's history, theater and performance, popular culture, Victorian studies, and American studies.
"A fascinating story, and a major contribution to our understanding of lesbian history. . . . The work done on archival resources is both impressive in its extent and wholly convincing in its effect." --Jacky Bratton, University of London
Lisa Merrill is Associate Professor of Communication and Performance Studies, Hofstra University. She is the coauthor of The Power to Communicate: Gender Differences as Barriers, and the author of Untying the Tongue: Power, Gender, and the Word, forthcoming.

". . . succeeds . . . in completely and fully restoring and re-empowering Charlotte Cushman in her overlapping roles as both actor and woman. It is a richly historicized and theoreticized portrait of a multifaceted, paradoxical, altogether compelling figure. As such, Merrill's work is not only an important theatrical biography, but a signal study of the complex interstices between public and private personas. . . . When Romeo Was a Woman is an impressive scholarly achievement . . . . [It is] likely to stand as the final word on Cushman for many years to come."
—Daniel J. Watermeier, University of Toledo, Theatre History Studies, 1999

"This is the definitive biography of Cushman, a 'major contribution to our understanding of lesbian history.' Richly illustrated and highly anecdotal, it's also downright good dish."
—Carolyn Gage, Lambda Book Report, March 1999

". . . Lisa Merrill is able to shed light on the subject [of Cushman's appeal], while offering readers an intriguing interpretation of gender relations and much shrewd analysis of great acting."
—American Theatre, July/August 1999

"Merrill's attempt to focus a queer lens on Cushman's long-term relationships with other women adds a significant layer of integrity to the continuing recovery of this major figure in theatre history. . . . Cushman, who brought an unprecedented level of research and reconsideration to each of her theatrical roles, would likely applaud Merrill's own investigative turn of mind. This engrossing account follows her through three decades of performance, travel and residence in the US, England, and Italy. . . . . Lisa Merrill's careful reading of scrupulously marshaled evidence casts new light upon the long history of the passionate munificence of women's lives together."
—Marilyn Richardson, Women's Review of Books, July 1999

"A fascinating story, and a major contribution to our understanding of lesbian history. . . . The work done on archival resources is both impressive in its extent and wholly convincing in its effect."
—Jacky Bratton, University of London

When Romeo Was a Woman: Charlotte Cushman and Her Circle of Female Spectators (Triangulations: Lesbian/Gay/Queer Theater/Drama/Performance) (Paperback)